Following the 1954 signing of the Geneva Accords, Vietnam was divided into two parts: The liberated North entered a transition period towards socialism while the South continued to resist the American forces and fight for national reunification. The article introduces the roles and contribution of Vietnamese women during the wartime and their stories in two parts of the country in the period 1954 – 1975

In the South, women led the resistance in rural and urban zones, conducting head-on political and armed battles and participating in the 1960 General Uprising. Women also joined the armed forces, taking care of wounded soldiers and hiding and protecting revolutionaries. Women made great contributions during combat and in the resistance movement with many leaving their lives for the country. Tens of thousands of women were imprisoned and tortured, but remained loyal to the revolution. For their bravery the Southern Women’s Movement received the titles of “First Class Bronze Order of the Nation” and of “Heroic, Indomitable, Honest and Responsible”. A group of 200 women and 56 female units were awarded with the title of “Heroines of the Popular Armed Forces”, and 30,000 women received the title of “Heroic Mother of Vietnam”. 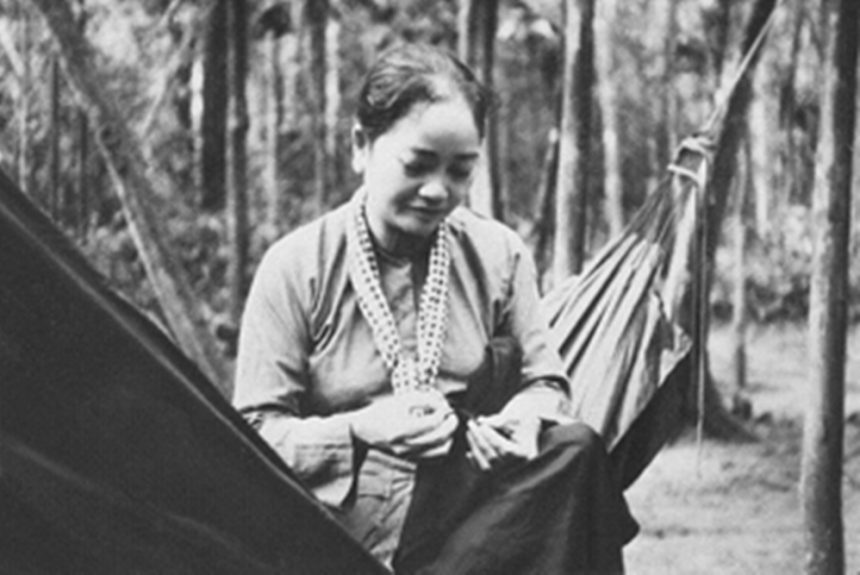 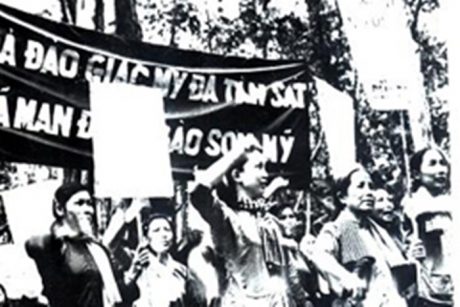 Demonstration against the massacre of Son My 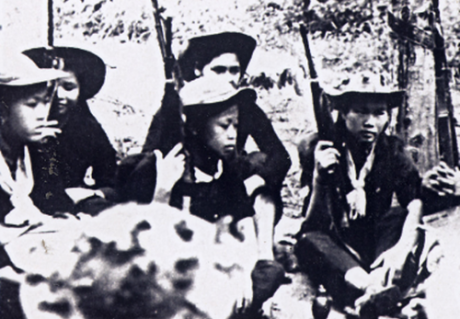 2. Armed battles
In the South, women accounted for 40% of the guerrilla and militia forces. There were more than 50 female squadrons and many platoons of female guerrilla fighters and artillery combatants in rural or mountainous regions. In urban areas female militias and commandos destroyed military authority by attacking important hostile control posts.

3. Intelligence agents and commandos
Working in secret the women in the information service have always faced danger. They contributed greatly in striking against the hostile positions and passing on information of great importance. The women commandos not only assured the transportation of weapons, but also led surprise attacks on important targets. 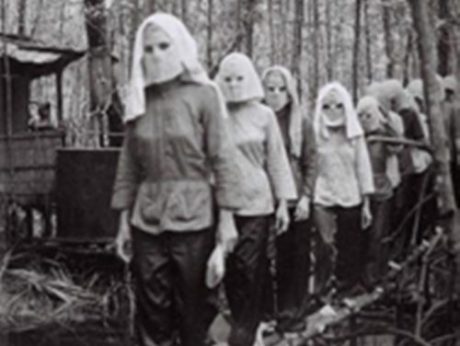 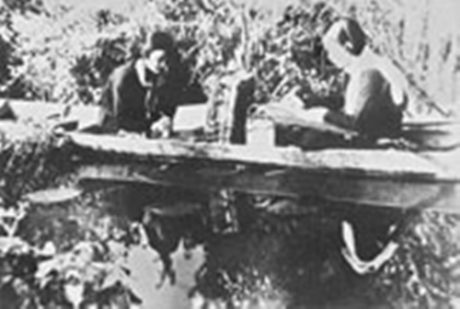 4. Liaison and protection of revolutionaries

Women were mainly responsible for these activities. With their intelligence and courage, they found many creative ways to hide and transfer the documents. In cellars and other underground shelters, they protected and fed soldiers, wounded, liaison agents and all the revolutionaries in the occupied zone.

5. Care for wounded soldiers
On the front and in the liberated zones the military hospitals female medics not only administered first aid, transported and nursed the wounded but also undertook complex surgery. During bombing attacks the female medics had to evacuate the wounded to tents in safe areas and protect the wounded until they were ready to return to the front lines. Conditions were difficult with sleep often impossible because of the need to dig trenches or care for the wounded. The women also shared their meagre rations with the wounded. In the occupied zones the women worked underground in tunnels, women were in charge of medication and medical instrument supply for revolutionary troops. 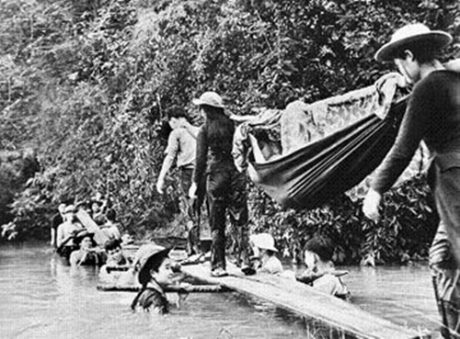 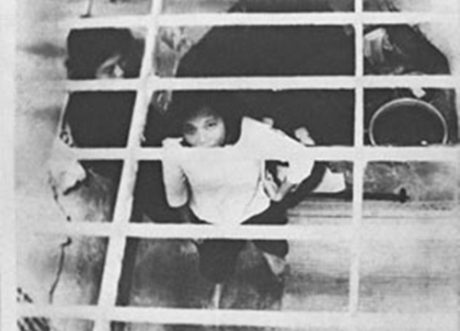 The ″tiger cage″ of Con Dao

6. Prison battles
The Saigon regime established 215 prisons. Thu Duc housed female political prisoners. At Con Dao the women prisoners were locked in “tiger cages”. While chained, they were forced to eat, sleep and fulfill all their bodily functions in the same spot. They were beaten, electrocuted and burned with lime. But they did not stop calling for the improvement of their detention conditions or lose their attachment to their communist ideals. They asked permission to mourn the death of Uncle Ho in 1969 and demanded their liberation according to the Paris Accords of 1973.

In 1970, I was exiled to Con Dao Island for the second time and was detained in a “tiger cage”.  This was where toughest political prisoners were held. On top of the ceiling, there was always a barrel containing lime powder. If a prisoner showed any sign of dissent, the guards would pour down the powder immediately – burning our skin. We didn’t bathe for three months, because we were only given two small cups of water to drink every day. The tiger cage was hot like an oven, and we came up with a way of washing ourselves – we would use a nylon bag to cover our body until we were sweating. We would then undo the bag, and use it to scrub the hated dirt off. Because of the water shortage, most women cut off their hair. We selected short hairs to be woven into a small broom to sweep clean our sleeping place, while long hair was braided into a line measuring more than 3 meters. We hung the line up at the walls on either end, to use as a clothes-line to dry our clothing. I kept this hair-clothesline with me, and used it during my time at various prisons such as Chi Hoa and Tan Hiep, until I was handed over to the revolutionary side in Loc Ninh in May 1974. 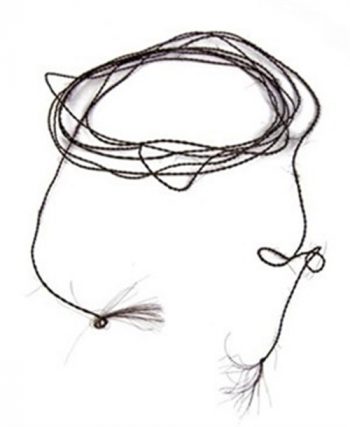 After the 1954 victory in Dien Bien Phu, North Vietnam rebuilt its economy and developed a socialist state. In 1965, the US applied the “local war” strategy in the South and multiplied attacks on the North. Men were mobilized to the front and the women assumed all work tasks behind the lines.
Many women joined the “Three Responsibilities” Movement created by the VWU, which focused on: production, combat and family to turn the North into a strong support base able to help the South. Thousand of women joined the militia, the army or became young volunteers. Military forces and militias in the North brought down 4,181 planes, destroyed 271 military ships and imprisoned 472 American pilots in response to the American “Destructive War” Campaign (1965 – 1972). After the signing of the Paris Accords the South was liberated and Vietnam was reunified in 1975.

The VWU received the 2nd class “Independence” order and the “Ho Chi Minh ” Medal. The “Heroes” Title was given to 12 units and 181 women, 1,781 women received the “Uncle Ho” badge and the “Three Responsibilities” Award was given to more than three million women. 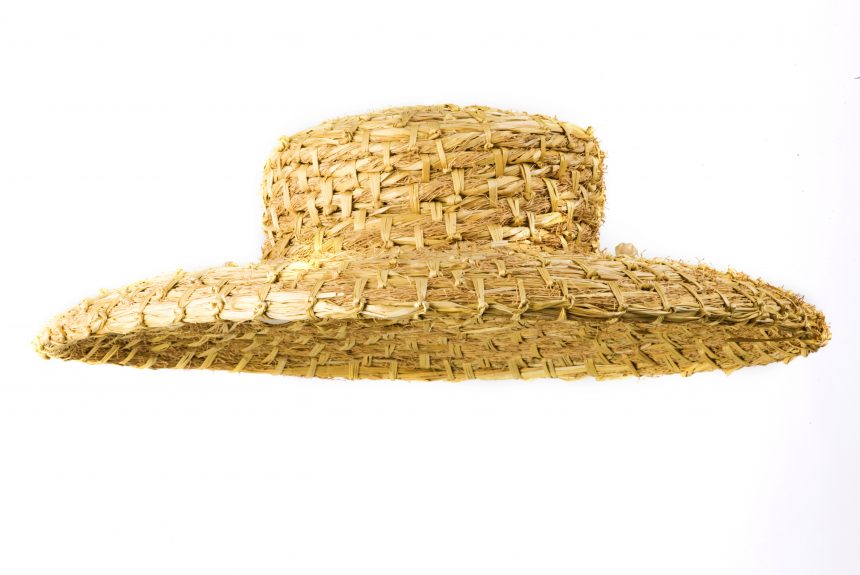 Straw hats were popular from 1965 to 1972 to help avoid shrapnel, and cluster bombs.

“ Although the American war had extended to the North, the Americans were mainly bombarding the Central region at this time. So, my homeland here in the North was still experiencing peace. I still remember my first day at school. Instead of learning the poem, “My homeland is so beautiful and has the shape of a sickle”, my teacher asked us to close our books. Our first lesson was about how to detect and escape from bombs. Our teacher explained to us “If the bomb looks like a marble, it is going to fall down, but if the bomb is as long as a stick, it is far away from us, so just sit still and put on your straw hat”. He showed us how to look for the shelter and run to the tunnels. Then we practiced first-aid. All the pupils were so eager and it felt funny because we had mock battles, but the teacher just sat still in the corner of the class, I saw tears falling down from his eyes. Then I realized that war was not like our mock battles, war was not a joke”.

Poet Trần Đăng Khoa and his memory in 1965

1. Life during the war

During the “Destructive War” of the Americans, North Vietnam militarized the entire population to create combat outposts, tunnels and air raid shelters as well as evacuating civilians in high-risk zones. At the same time agricultural production was a focus to ensure the stability of daily life. Anti-aircraft defence was a priority. Residents had to be vigilant, limit the use of lights to protect themselves from bombers and hide in the air raid shelters at the signal from an air raid siren. In many regions daily activities had to take place in the air raid shelters or in the tunnels 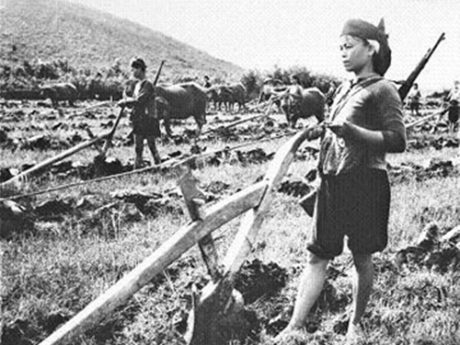 Women working whilst at the same time being ready for combat, Trung Bao, Thai Binh 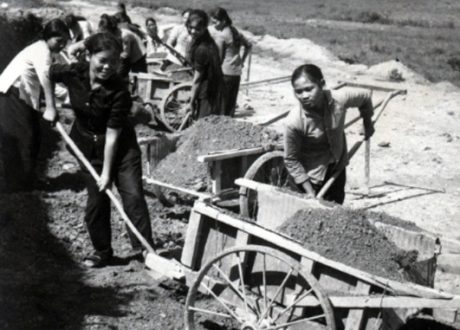 2. Young volunteers and soldiers
In 1965, the Anti-American Young Volunteers’force was founded to maintain road communications. More than 60,000 women repaired the roads after bombing at crucial points such as the Ham Rong bridge (Thanh Hoa), the Ben Thuy ferry (Nghe An) and the Dong Loc crossroads (Ha Tinh). Women soldiers mostly worked in medical care and communications. Some were truckdrivers at the front. The ‘Nguyen Thi Hanh’ team of 35 drivers transported goods and wounded soldiers in Quang Binh the combat zone contributng to the construction of the famous Ho Chi Minh Road.

3. The militia
Under the direction of local military committees, female militias worked in the fields and in factories, fought in battles, transported and nursed the wounded and repaired bomb damage. Twenty of these female militia groups shot down 28 planes with a total of 4,183 planes brought down by the armed forces. 245 militia groups received the title of “Hero of the Popular Armed Forces”, including Hoa Loc, Dong Phuong Hong and Ngu Thuy. 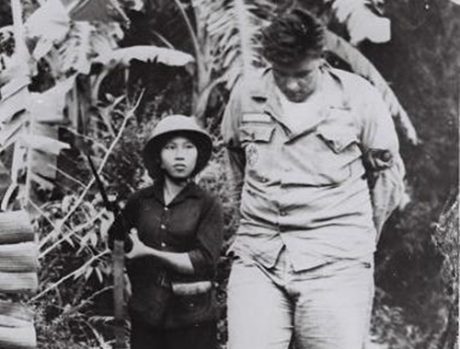 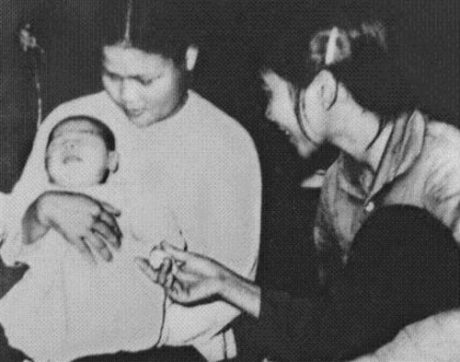 4. The Vinh Linh tunnels
To cut the arterial road used for transporting assistance to the South, the enemy united their air and sea forces to destroy Vinh Linh on the demarcation line. An underground network of more than 10 km was built then. It was made up of tunnels, air raid shelters and guard rooms, which could withstand the bombings. These tunnels connected the battle fields to a network of trenches more than 30 km long. The two-level 400 m long tunnel from Vinh Moc to Vinh Thach was the most important. It included water wells, an infirmary, a maternity ward, shops, class and meeting rooms and areas, which catered for the daily life of thousands of people.