April 30th, 1975 was a remarkable day in Vietnam history. The war ended and the peace came back to the Vietnamese. Returned from the war, American and their family members are carrying out many different emotions about the war in Vietnam. One of among them is Mrs. Cecila M. Goto, a mother of an American navy soldier serving in Vietnam war, who has lived in torment nearly 20 years, until she completed her wish.

A gift not bringing happiness

The son of Mrs. Cecila M. Goto was a navy soldier who had been serving time in the Vietnam war. When he returned home from Vietnam he presented to his mother a pair of earrings. Instead of bringing her happiness, she was heartbroken, feeling guilty and tormented when she knew those earrings had been made from wedding rings of deceased Vietnam soldiers. That feeling  plagued her for nearly 2 decades, as did her sons sense of guilt. The mother decided to send back these earrings to Vietnam with an apology in the hope of bringing peace to all and for the family to have relief. 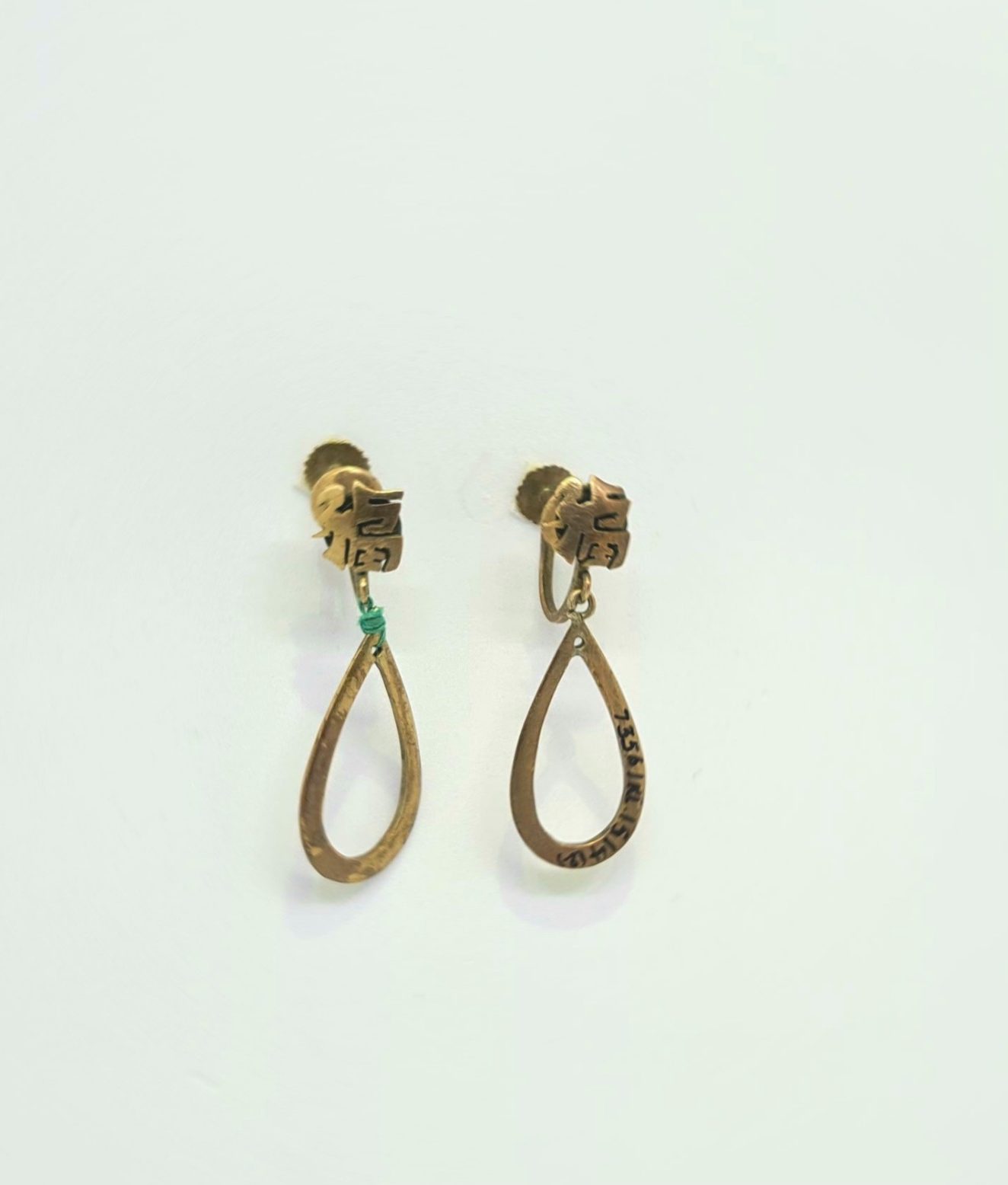 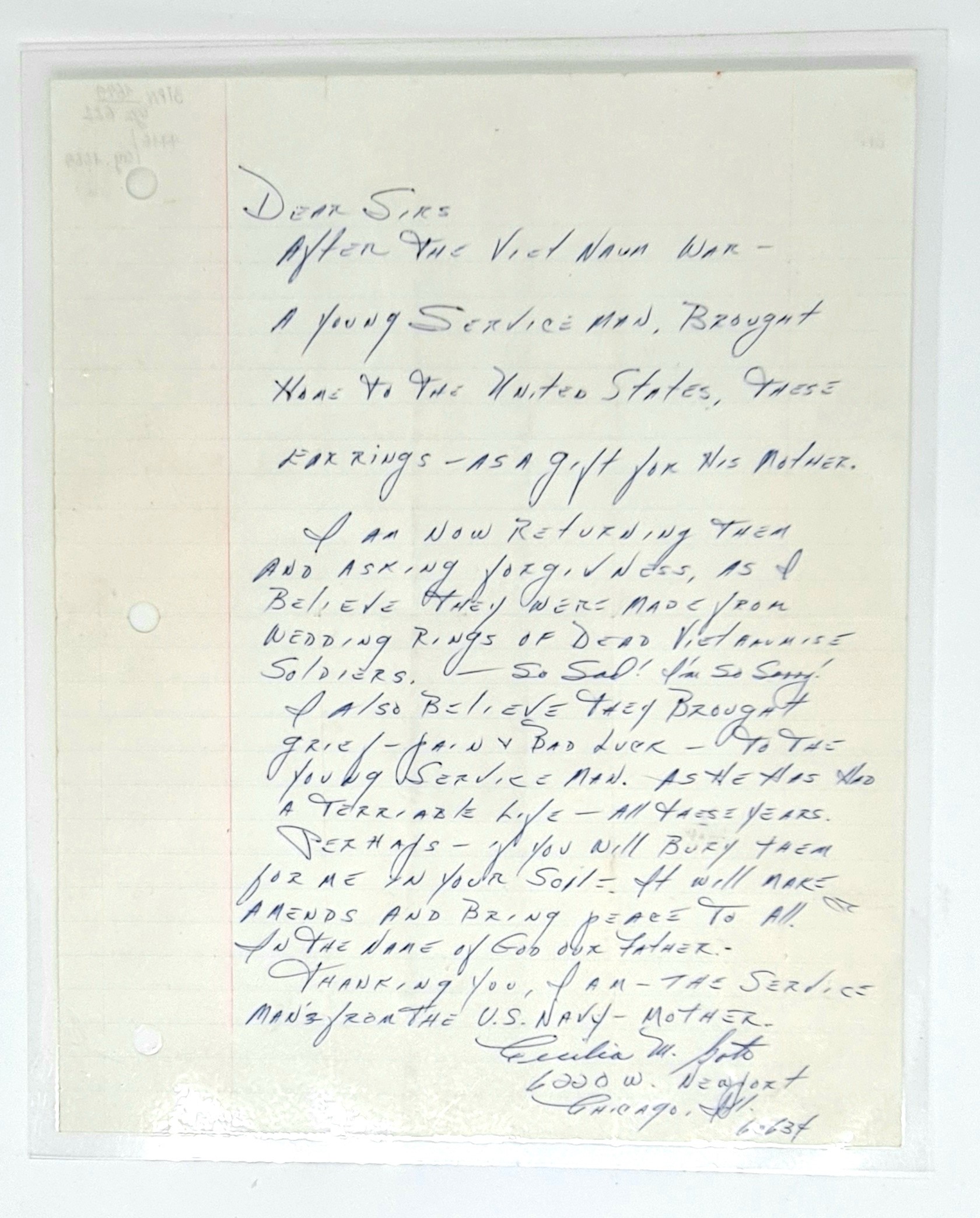 The earrings with an apology letter from Mrs. Cecila M.Goto sent back to Vietnam

The earrings with an apology letter were sent accidentally to the director of Da Nang Post Office on the occasion of  the War Invalids and Martyrs’ Day, July 26th, 1994. She wrote in her letter: “Dear sirs, after the Vietnam war, a young service man,  brought home to the United States, these earings – as a gift for his mother. I am now returning them and asking for Vietnams forgiveness, as I believe they were made from wedding rings of the dead Vietnamese soldiers. So sad! I am so sorry! I also believe they brought grief pain and bad luck to the young service man. As he has had a terrible life  all these years. Perhaps, if you will bury these for me in your soil, it will make amends and bring peace to all. In the name of God and Father. Thanking you.” 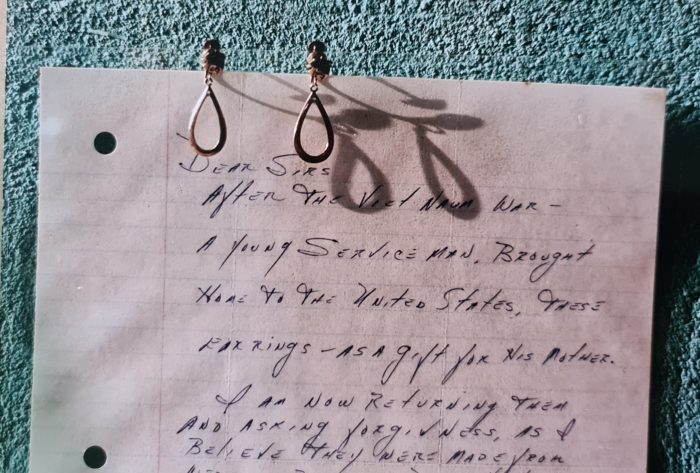 The letter and earings 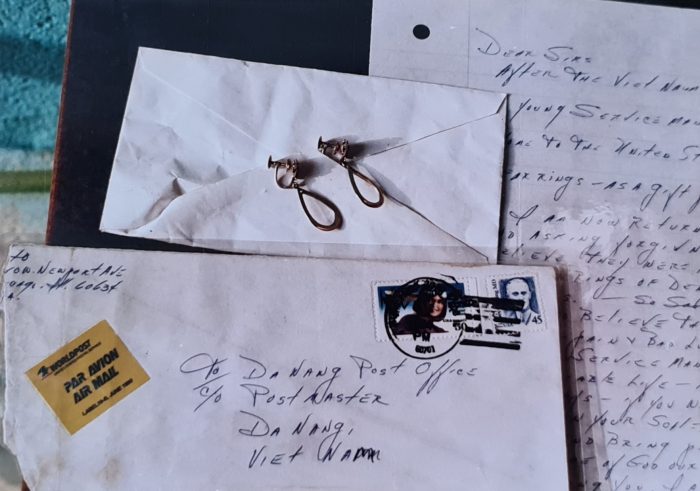 The whole envelope and letter sent to Vietnam

This letter carries words of apology from an America mother to Vietnam and Vietnamese solider families about what her son an American soldier did on this land. The letter and these earrings  now returned to their homeland. We wish this American mother has her inner peace.

More than a wish

The wish from an American mother is bury these earrings in the soil of Vietnam, so why, after nearly half a century ended the war, the letter and these earrings is introduced to the public….

The story of the letter and earrings appeared in the People’s Army Newspaper No. 11931 issued on August 7, 1994 and the Saigon Liberation No. 6134 issued on August 8, 1994. This caught the attention of not only the collectors of the Vietnamese Women’s Museum but also the female leaders of that period. Instead of burying these earrings into the soil, Vietnamese Women’s Museum sent staff to Da Nang to ask for this object to preserve at the museum. After a time of collecting and sending letters to ask for the permission from Mrs. Cecila M. Goto until December 5, 1994, the earrings and her letters then officially became objects of the Museum. It was considered as a wish of forgiveness from an American mother about the crimes in Vietnam of her son and the hope for peace for all people. 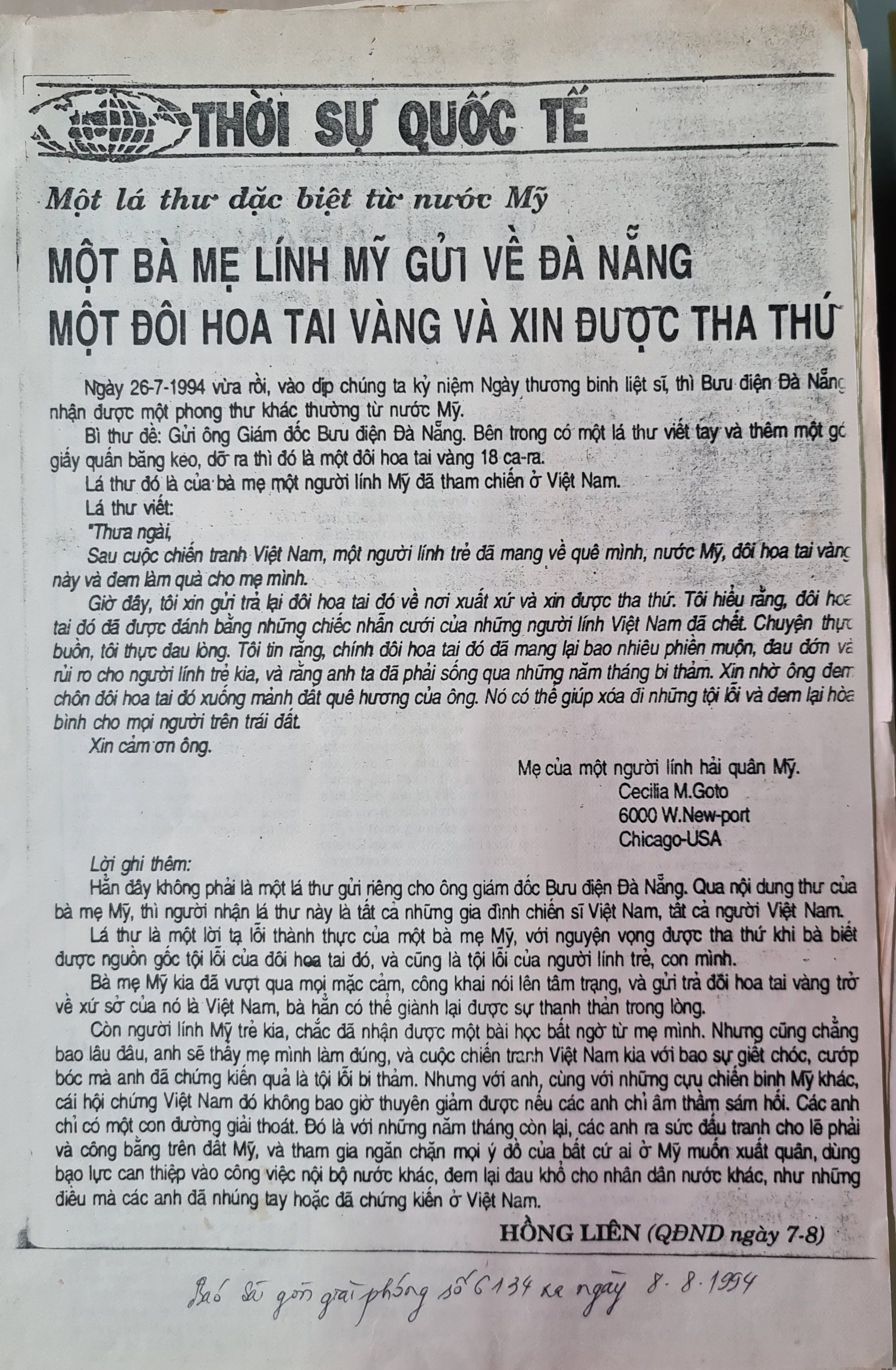 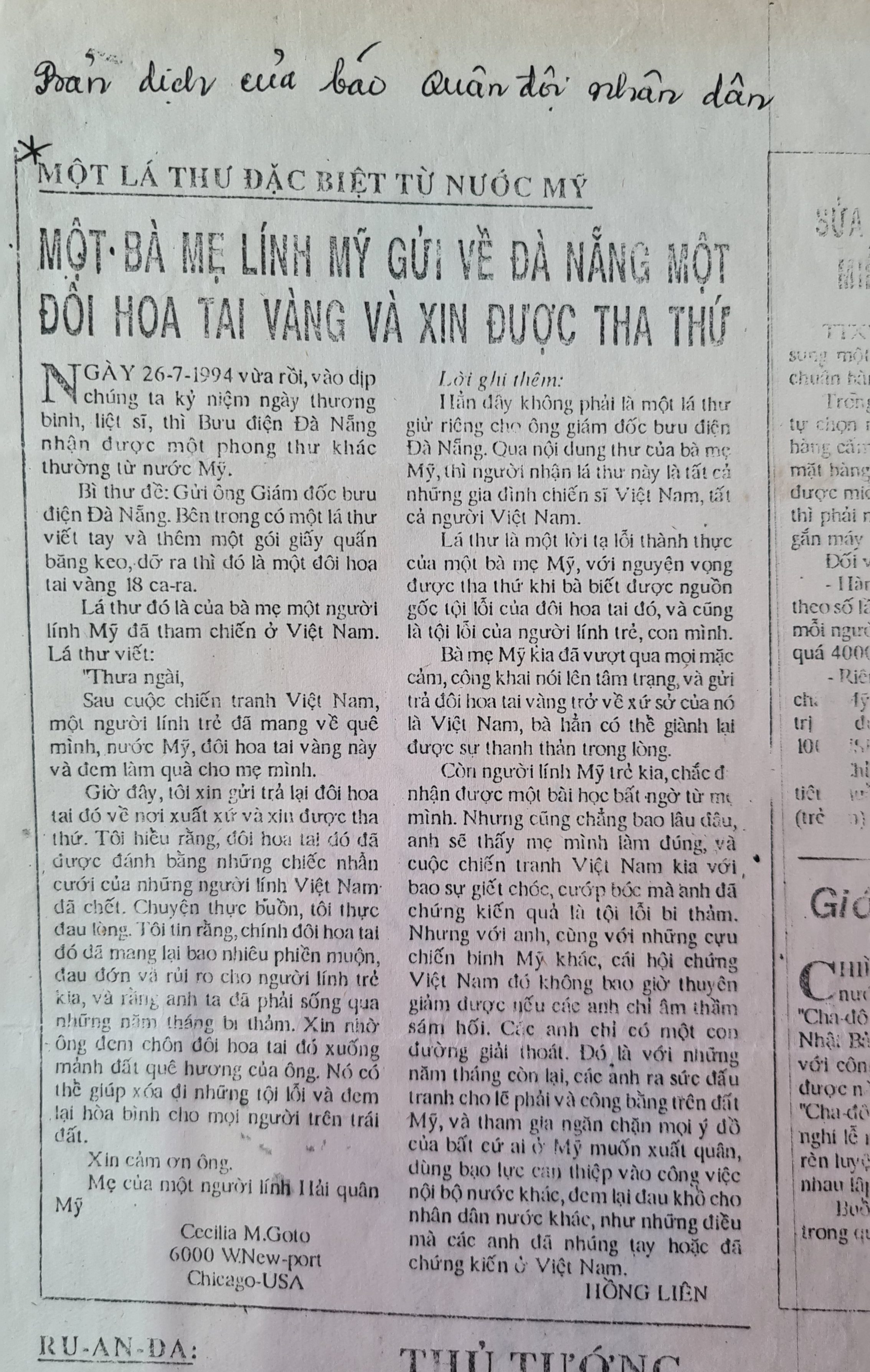