The Việt Nam Women’s Museum organized a ceremony to receive materials donated by Nancy Hollander, a member of the American women’s delegation that met with women from Việt Nam’s two regions in Jakarta, Indonesia in 1965.

The Việt Nam Women’s Museum organized a ceremony to receive materials donated by Nancy Hollander, a member of the American women’s delegation that met with women from Việt Nam’s two regions in Jakarta, Indonesia in 1965. At that time, lawyer Nancy Hollander was a student and the youngest delegation member. She saved more than 450 documents and artefacts, including letters she received, reports, her notebook, books, articles, magazines, etc., which record this historical landmark in the relationship between American women, the Việt Nam Women’s Union (in the North) and the Women’s Union for Liberation of South Việt Nam. The documents clearly reflect the points and the shared verbal presentations made by the women from the two countries regarding opposition to the American war in Việt Nam and at the same time make clear the role of the Women’s Union in exerting its full strength in foreign relations through meetings for peace, independence, and freedom. This is the first time Nancy Hollander has opened these documents and materials to the public. She has done so through the Việt Nam Women’s Museum in accordance with her wish that the Museum will archive these precious documents and introduce them widely through exhibits and educational and public-education activities.

The presentation of documents was also an opportunity for a meeting after many years between the American lawyer and Vietnamese friends, including a member of the Vietnamese women’s delegation from the meeting in Indonesia years ago: That person is Mme. Nguyễn Thị Bình, former vice-president of the Socialist Republic of Việt Nam and head of the delegation from South Việt Nam at Jakarta. Accompanying Nancy on this visit to Việt Nam was her older brother, who contributed funds so that the American delegation could make the trip to Jakarta in 1965.
For the Việt Nam Women’s Museum, this is a collection of priceless materials because, according to Mme. Nguyễn Thị Bình, this first people’s diplomacy meeting between Việt Nam and the United States was between women. For the Women’s Union, these documents are clear evidence of the Union’s prompt and sensible work and the Women’s Union’s results in foreign affairs.

The ceremony to receive the materials was on March 7, 2019 at the Việt Nam Women’s Museum.

*/ American writer Lady Borton, the person who made the connections for reception of the materials

After arriving in Việt Nam for the first time in 1969, Lady Borton has put great effort into researching Việt Nam’s history and is a “quiet American” seeking to awaken peace in the relationship between Việt Nam and the United States. She has received three honorary university degrees for her fifty years of working on all sides during and after the war in Việt Nam. Even now, she continues working to help the two sides develop warmer relationships.
Lady has visited the Việt Nam Women’s Museum from when it was first established, understands clearly the Museum’s serious role, and has been a close friend of the Museum’s generations of leaders and staff for the past thirty years.
Whoever has met Lady often has seen this American woman moving materials by bicycle along Hà Nội’s many streets… Whenever anyone asks why she loves Việt Nam and why she loves Vietnamese women, she will laugh and say, “It’s as if I became a Vietnamese woman long ago. My Vietnamese name is Lý, and so people call me Sister Lý or Aunt Lý.”
Perhaps we can say that if it were not for Lady, we would not have this link between history and Vietnamese women, and we would not have this priceless collection of our own historical documents.

*/ Nancy Hollander, from her youth as a student at the delegation meeting to her work as a human-rights lawyer

Before becoming a famous American criminal-defense lawyer, Nancy Hollander took part in many actions through many organizations for peace, including participation in the movement supporting peace for Việt Nam. “I had never thought of myself as a presenter until an event at Powder Hill, when I perceived that there were matters about which we should speak, about which we could speak and must speak. This was an example of new strength, which I felt after experiencing the strength and courage of Vietnamese women, people who had suffered from war continuously for twenty-five years. Whenever this war and while all other wars blacken this earth, American women must take part in resistance struggle: We must be prepared to sacrifice our time and effort to transform this earth now and in other countries into places where children can live.” (Excerpted from a letter Nancy Gitlin [Hollander] sent from Chicago, Illinois to Mr. Leonard on August 24, 1965.)
Subsequently, Nancy Hollander earned a law degree at the University of New Mexico in 1978 and put her heart into defending in the courts accused individuals and organizations, particularly regarding national security and human rights. She has been the legal representative for two political prisoners held in the American prison at Guantanamo Bay, Cuba and was able to secure release for one of them, Mr Mohamedou Ould Slahi, who had described his arrests in a diary. Nancy Hollander put great effort into helping with publication of that work under the title Guantanamo Diary.
In addition to her legal work, Nancy Hollander has lectured and run training sessions in many well-known institutions in Austria, France, the United States, the Netherlands, etc. She is the author of many books and articles on many topics, including the securing of evidence in international cases, illegal search and seizure, expert witnesses, defense of child abuse cases, ethics, evidence, and trial practice. She has also served as a consultant for UNDP (United Nations Development Program) in Việt Nam.
Selected Achievements:

*/ This story began with a photograph, which led to the first meeting between Lady Borton and Nancy Hollander

In 2018, during the 50th anniversary in Hà Nội of the 1968 Tết Offensive, an American delegation met with Mme. Nguyễn Thị Bình. At that time, Lady Borton was working on a revision of her translation of Mme. Bình’s memoir, Family, Friends, and Country. Lady gave every member of the delegation a copy of her previously published English translation of Mme. Bình’s book. James W. Russell, a member of the delegation, wrote a thank-you letter to Lady and said that he had noticed in Mme. Bình’s book a photograph taken in Jakarta, Indonesia during 1965 of one of Jim’s friends and Mme. Bình. That friend is Nancy Hollander. James wrote an e-mail to Nancy, telling her about Mme. Bình’s book in English with a photograph of Nancy. Nancy bought a copy of the book and asked James for Lady’s e-mail address. Nancy and Lady chatted via e-mail about Mme. Bình, their friend in common.
Subsequently, Nancy told Lady that she still had the documents and artefacts, which the Vietnamese participants had brought with them to Jakarta in 1965 and also some documents sent to Nancy by mail after the meeting. Nancy didn’t know to whom in Việt Nam she should give the documents. Lady suggested the Việt Nam Women’s Museum. At the same time, Lady agreed to carry the collection of documents and artefacts from the USA to Việt Nam. Lady also worked with the staff of the Việt Nam Women’s Museum to research and organize the documents, create document lists, and verify the historical contents of the contents of the collection.

As a first step in classifying this collection and from additional discussions with Mme. Nguyễn Thị Bình, Lady Borton, and Nancy Hollander, the Việt Nam Women’s Museum has been able to summarize several important points:

1. This first people’s diplomacy between Việt Nam and the United States was organized in a third country by women (information contributed by Mme. Nguyễn Thị Bình)

2. The route to Jakarta:

– The initiative for the meeting began with Women Strike for Peace (WSP) in the autumn of 1961. After a decision at a WSP meeting in Philadelphia, Pennsylvania, USA in November 1964, two WSP representatives took part in an event organized in Moscow to commemorate the end of World War II. They met with staff from the North Vietnamese Embassy and the office of the National Liberation Front of South Việt Nam. The American women put forward for discussion and reached concensus on implementing a strategy to address the American War, which was escalating in Việt Nam.
– WSP participants raised their own funds for the trip (Letter from Mrs. Frances Herring, a member of the American delegation at Jakarta sent to Nancy Hollander on June 30, 1965 before the delegation’s trip, speaking about the efforts to raise funds and prepare for the trip).
– On the Vietnamese side, participants prepared documents (copies of the Geneva Agreement for every participant; papers for students; information about Việt Nam, reports, etc).

3. The topics discussed at the meeting:

– The participants from each group reported on their situations at home and the development of the war in Việt Nam.
– The American women came to understand more clearly about Vietnamese women, the division of their country, and the situation of the war in Việt Nam. They described the barriers they had faced when trying to persude their government to end the war in Việt Nam. The Americans researched the documents they had received from the group of Vietnamese women to add to their own discussions and made a list of straight-forward questions relating to their doubts and reservations about the information.
– All three sides agreed that implementing the Geneva Agreement was the only possible solution leading to an end of the war in Việt Nam. The women agreed that the United States had violated the Geneva Agreement. Thus, the responsibility of American women, of those who had accepted the task of guaranteeing a change in their government’s policy, was to create the basis for “respecting the independence, freedom, and territorial integrity of Việt Nam” – the main point in the Geneva Agreement.
– The women promulgated a Joint Statement, with these points (excerpted from the original text): American people should not condone this cruel war which is daily killing Vietnamese people and American men. American women have not borne and brought up their sons to kill the innocent and to sacrifice themselves in an unjust cause. Citizens in a democracy have the right and responsibility to change a government policy which is immoral. We urge American women to work with dedication to end the war in Việt Nam. It is essential that the Geneva Agreement be implemented without delay : This means the withdrawal of U.S. troops from South Việt Nam, the cessation of acts of war against North Việt Nam, and the Vietnamese people left free to settle their own affairs without foreign interference… As women, we cannot rest until Vietnamese children, American children, and all children are free to grow up in peace and security.

4. Activities of the 2 delegations after the meeting

– Việt Nam: A number of the participants in the Vietnamese delegation continued work in public education and anti-war activism and support for peace in Việt Nam in various countries: Slovakia, Russia, Austria, and Sweden (according to news relayed in letters written to Nancy by participants, including Mme. Nguyễn Thị Ngọc Dung, Mme. Nguyễn Khoa Diệu Hồng, and Mme. Nguyễn Thị Bình).
– United States: Participants in the American delegation began activist campaigns opposing the war and supporting peace in Việt Nam: They wrote reports, were active in local communities, went on speaking tours, and made documentary films…
– Links after the meeting: The participants in the delegation of Vietnamese women continued to send letters urging continued action by American women to oppose the war and support peace for Việt Nam; they shared letters and photos from Jakarta and sent postcards asking about the Americans’ health and activities and describing their own work for Việt Nam with information about their activities.

Below are photos taken at the ceremony: 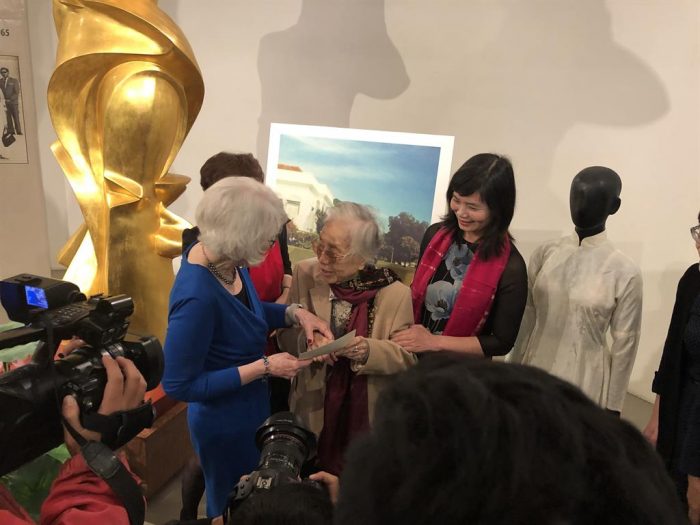 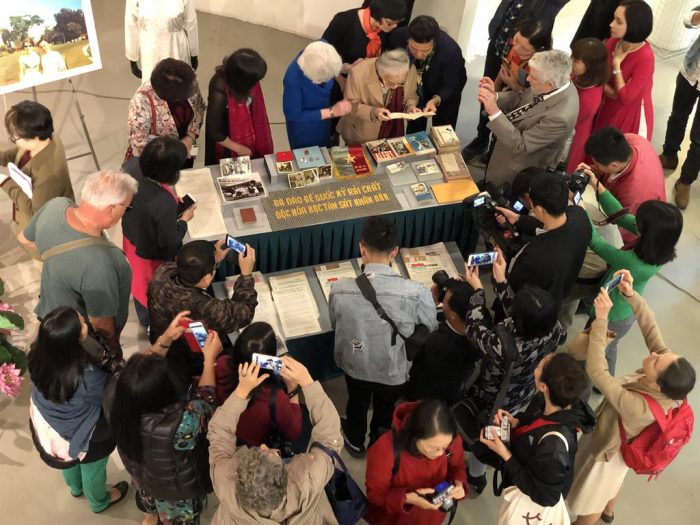 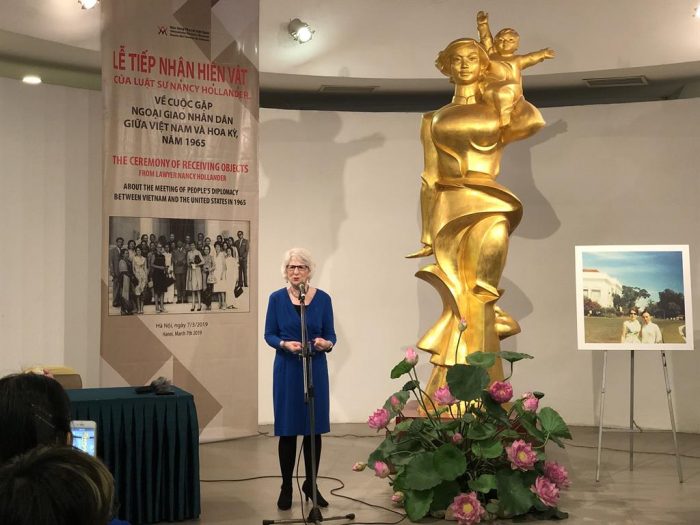 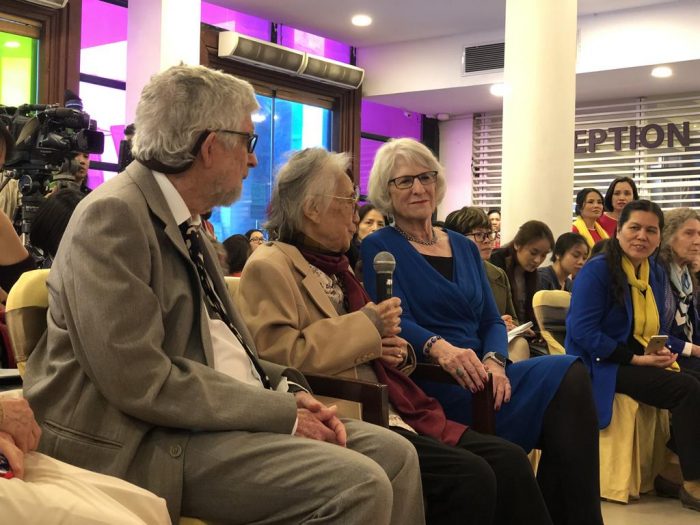