This exhibit offers diversified fashion and costume art using traditional techniques of many of the differing 54 ethnic groups here in Vietnam. It also introduces the beauty of these ethnic womens fashion ascetics via the use of jewels, betels and areca nuts, per traditional ritual. By displaying a corresponding jewelry collection featuring; hairpin’s necklaces, earrings, bracelets, silver belts, and woven accessories you can quickly learn of the joy in which Vietnamese women express their femininity and hundreds of years of family tradition. 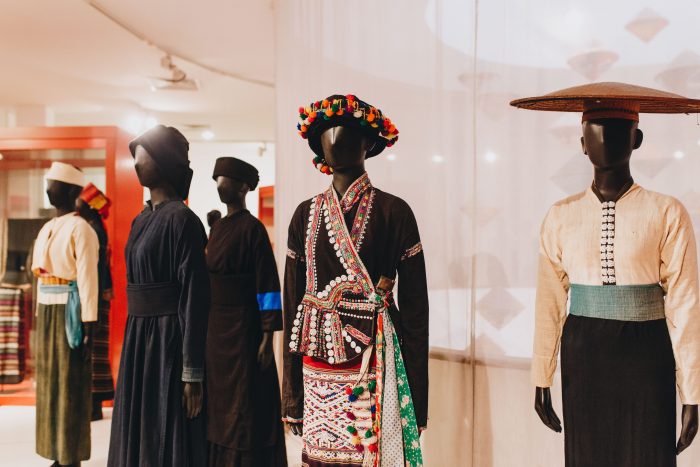 Vietnam has 54 ethnic groups with unique styles and motif arts, which showcase their traditions and are passed on to the next generations. It is a testament to the creativity and effort of women in all ethnic groups in Vietnam. Everything is hand made and in the past, only natural materials were used. Clothing styles have evolved over time and through external contact. Fashion exists even in the most remote regions. Today change is accelerating especially in the northern Hmong and Yao communities where synthetic fabrics, wool, and chemical dyes are now in wide use.

Cotton is the most popular fabric for Vietnam’s 54 ethnic groups, with natural silk reserved for applique and festive costumes. Hmong women use fabric woven from hemp which is then dyed with indigo. The Pathen, Flower Lolo and the Flower Hmong have very colourful clothing. Ethnic garments often incorporate many complex sewing techniques. The Yao and the Phula favour embroidery; the Lolo and the Pupeo applique, the Hmong and the Yao Tien batik; the Thai and the Khmer Ikat and the Muong, the Tay and the various populations of the Highlands prefer woven patterns. 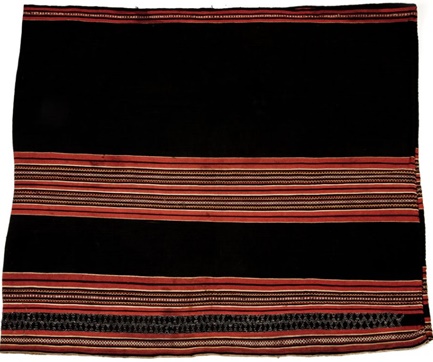 I made this dress using the cotton I grew at the age of 20. I made fibers from cotton and dyed using natural colors such as black from arum leaves, yellow from arac tree roots. I sat on the floor and tied one end of the loom to my back as I pushed the other end with my foot to weave…

Embroidery is a popular technique with communities in the mountainous North because women can embroider anywhere, at the market, in the fields, or while visiting. Girls learn to embroider at a very young age and are already very skilled by the age of 12 or 13. The Hmong use cross stitch while the Yao and the Thai prefer to use a running stitch, feather stitch, or chain stitch. Traditional patterns are followed and passed on one generation to the next. Embroidery allows women to create natural curves and more modern patterns. 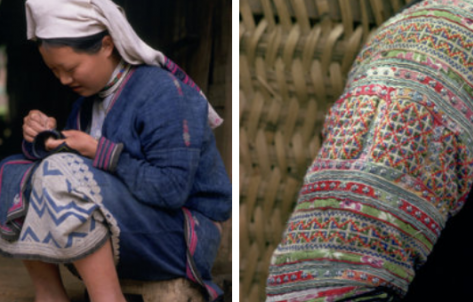 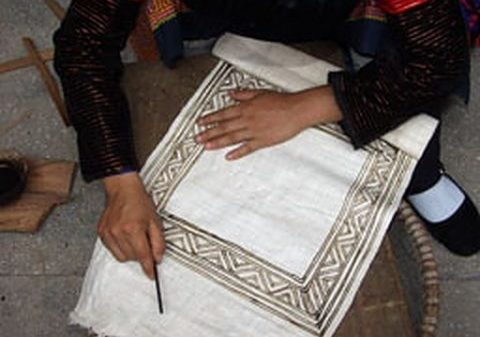 Batik
Batik is a saved-dye technique: part of the fabric is protected by wax during the dyeing process creating a pattern. This technique is used by the Hmong and the Yao Tien. Patterns are drawn on to the fabric with melted wax. The tools used are wax stylets made from curved copper, triangular pads, and tiny bamboo tubes. When the wax is dry, the fabric is dyed several times in indigo baths then immersed in boiling water to melt the wax. The protected patterns appear as a light color on an indigo background.

Applique
In applique small pieces of coloured fabric are sewn on to a background to create patterns. Various coloured fabrics are cut into geometrical forms and sewn on to the fabric while the threads are hidden behind the applique. This technique is used by some populations in the Northern mountains. Each group has its own specific patterns. The Lolo and the Pu Peo use triangular shapes to make patterns. The Hmong use a very elaborate technique called reverse applique. The top fabric layer is cut into patterns revealing the colour of the backing fabric. 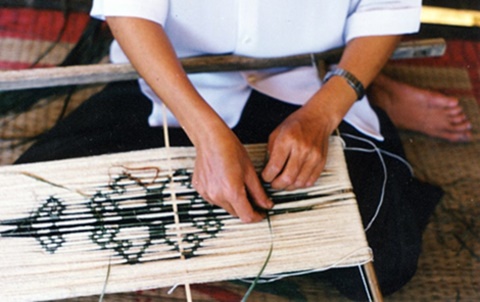 Ikat
Ikat is a saved dye technique like batik, but the threads and not the fabric is protected before the dyeing process. Some threads are tied up with plant or nylon fibers to protect them from the dyeing process. The dyeing process is repeated several times to obtain a multicolored thread that is used for the weft during weaving. In some regions chain ikat is also used. The ikat technique is used by the Black Thai, the Khmer and the Bahnar to create patterns with beautiful soft outlines.

Woven patterns
To create these patterns the weaver adds an extra thread to the weft. This process is undertaken in two ways: the thread moves on the entire width of the warp over and under and is then inserted where the pattern starts. The weaver then works on the wrong side. A large loom with pedals is used by the Thai and the Muong while Indonesian-style looms are used in the Highlands. These looms always have two rows of metal threads and the capacity for extra threads. The complexity of the pattern determines the number of metal threads. 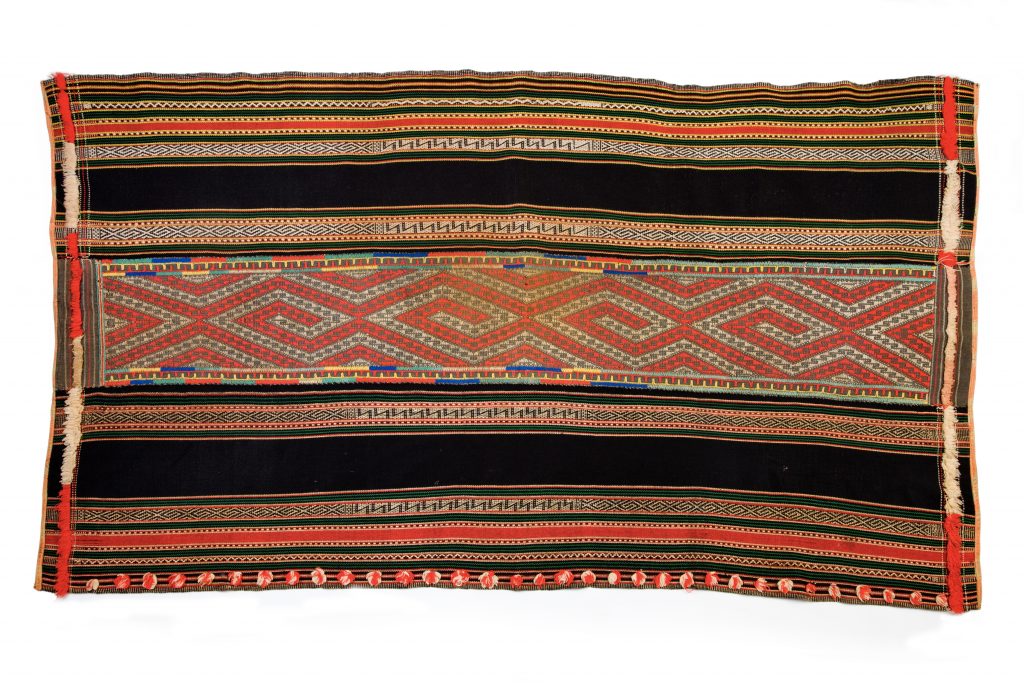 Viet’s mode
In the North, the four tails gown, (Tu Than ), and the skirt, were used by the women, up to the beginning of the 20th Century. In the South, the five tails gown (Ngu Than,) was worn in the 18th Century, and the Ba Ba starting at the end of the 19th C. Inspired by the Tu Than and Ngu Than, the Vietnamese painter Cat Tuong, invented the Ao Dai gown in the thirties. Since then this Vietnamese gown has seen a lot of modifications. It can have tails going down to the heels, knees, or ankles. But its style has become the image of Vietnamese women. 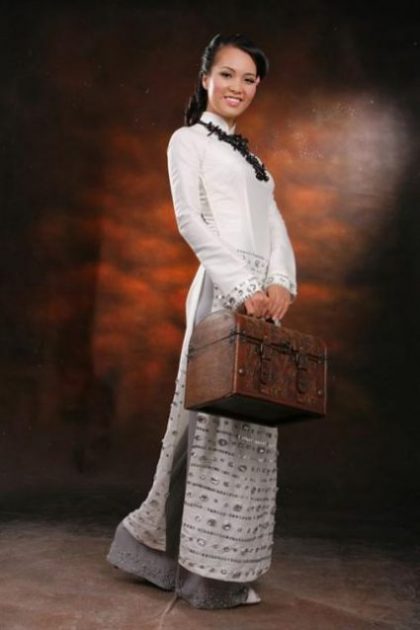 Women adorn themselves with many jewels ,bracelet ,necklace,earrings,pins, made with varied materials, ‘ differently shaped and decorated according to the regions and populations. The women in the Highlands worn big spiraled rings in copper.,their necklaces are in pearls of many colours or in agate. The earrings are in ivory or in bamboo, The jewelry in silver are appreciated by the populations in the Northern mountains. They are often engraved with geometricals or plant motifs. The torques, straight or torsed have two endings in the shape of a bird or snake ‘s head. The Viet like jewelry in gold, silver or jade. Among all the populations, some jewelry is worn to protect themselves against bad spirits or as a lucky charm. Other show their social status,. Nowadays aluminum and synthetic are widely used but traditional styles remain.

Hair ornaments
In Vietnam, women are always wearing hats, headdresses, or turbans and adorned themselves with pins, combs, or silver coins. The Yao Thanh Y and the Yao Lan Ten cover their chignon with headdresses decorated with large silver or aluminum jewel. The red Yao has heavy red headdresses. The Yao Thanh Phan of Quang Ninh shave their hair and put a layer of beeswax on their hair before covering it with the headdress.
Jewelry
Pins, earrings, necklaces, and toiletries ornaments are the most used jewelry. They can be in silver, bronze, agate, ivory, pearls bone, or aluminum. The silver jewelry is appreciated by the populations of the Northern mountains. They are considered as hunters of bad winds and show wealth and nobility. The ones in ivory and agate are the nicest and most precious for the women in the Highlands.

The bracelet was a gift from my father when I turned 10 years old. This bronze bracelet is spiral-shaped and worn from the wrist to the upper arm. Only a few people know how to make this kind of bracelet. Depending on the preference of the wearer, the spiral can be long or short. 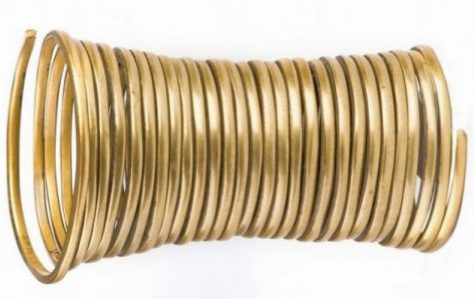 Until the mid 20th Century men and women lacquered their teeth black with resin from a tree.

The Thai, Khang, and Lu burned tree branches to extract resin which was collected on a piece of metal or in a bamboo tube. Water was then added to make it sticky. In the evening before going to bed 3 or 4 layers were applied to cleaned teeth. Two or three days later the process was repeated to ensure the teeth were very black, then a criterion for female beauty. Girls first lacquered their teeth at the age of 12 or 13. Now, only a few elderly women have lacquered teeth.

Women from the Lu Ethnic Group 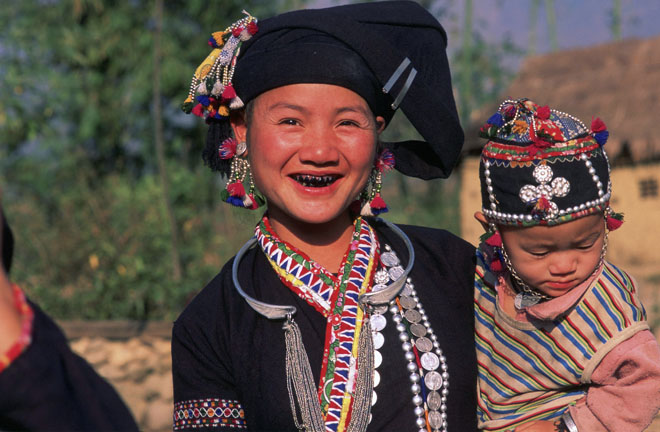 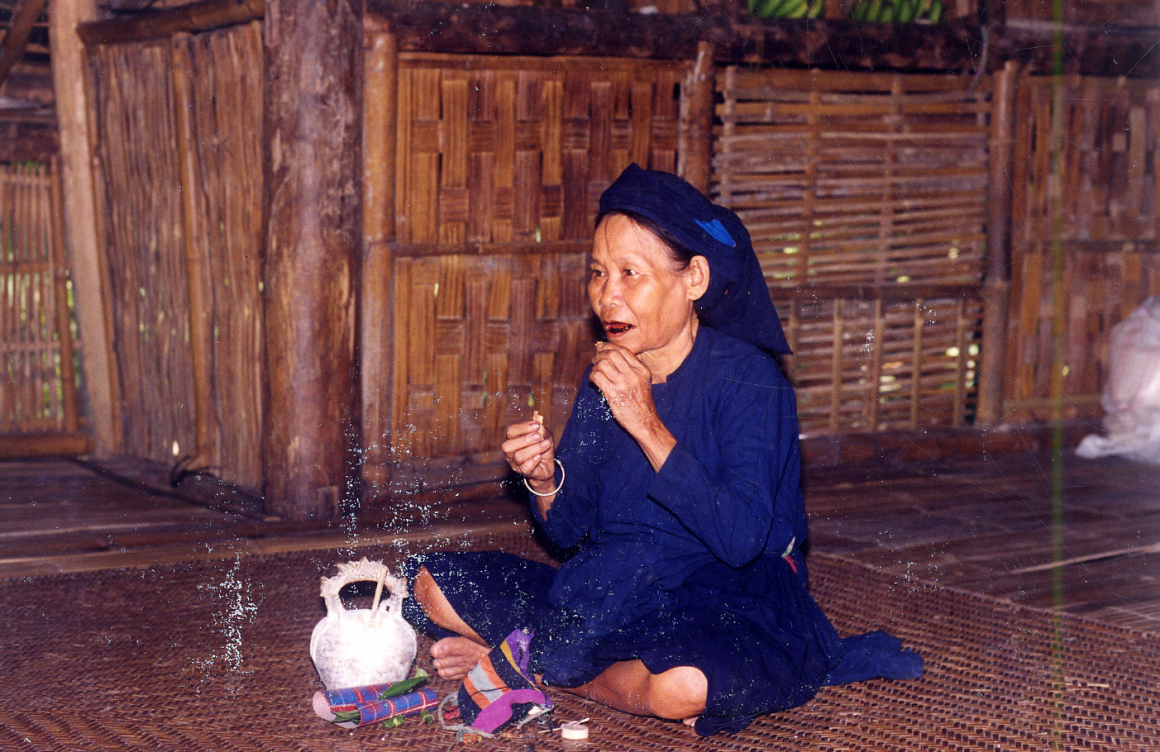 Betel is used in many Southeast Asian nations. For the majority of Vietnam’s populations’ betel and areca are essential offerings at weddings, funerals, and rituals. A chew of betel is made with a betel leaf, some lime, and a quarter of an areca nut. Users can also add a piece of tree bark or tobacco. The objects used for betel are a tray or a box, a lime pot, a knife, and a spittoon. The Tay and the Muong use cloth bags and an areca leaf to keep the betel leaves fresh. The elderly use a little mortar to crush the chew.

“The lime pot is considered the property of a deity, so my mother-in-law protected and kept it carfully in her room. She took it out to make a betel chew or tow welcome guests. She put lime with a knife onto the betel leaf which she rolled. After every use, a little lime stayed at the opening of the pot, and slowly a spout was formed…” 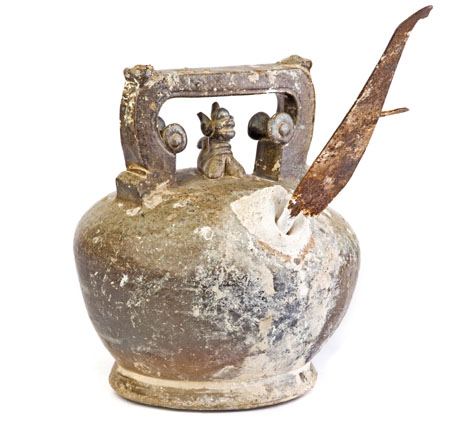