“Vietnamese Women – 70 Years of Development together with the Country” is held by Vietnam Women’s Union within the large Exhibition entitled “Socio-economic Achievements in 2015” organized by the Ministry of Culture, Sports, and Tourism. This is one of the many activities in celebration of the 70th anniversary of the August Revolution and National Day of the Socialist Republic of Vietnam held under the theme “Renovation, Integration and Development” displaying the most outstanding achievements in national defense and construction over the last 70 years recorded by different sectors, mass organizations and localities under the leadership of the Party and the State of Vietnam in socio-economic fields, particularly in the period of renovation.

“Vietnamese Women – 70 Years of Development together with the Country” shows the images of women actively taking part in the two wars of resistance against the French and the US with women guerilla, women transporting ammunition and supplies, women opening roads and serving the resistance, bringing deep impression and reminiscence to visitors. Each photo, each person is a fresh flower creating a milestone in the cause of struggle against foreign invaders by Vietnamese women. Out of the war, resilient women again mingle in the cause of the construction and development of the nation with constant renovation. They become leaders and managers, economists, or devoted mothers who are building their happy families. Vietnam Women’s Union has fulfilled well its role in raising the voice of women, protecting the rights of women and children, supporting women in economic development, building capacity for women, expanding cooperation regionally and internationally, thus contributing to enhancing the status of Vietnamese women and gender equality and national development in general. 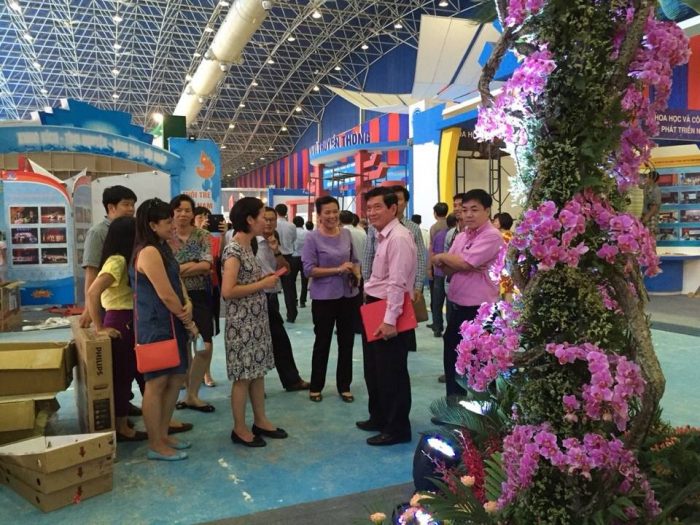 Among hundreds of diverse exhibition stalls held by ministries, agencies and localities, the exhibition of the Vietnam Women’s Union has left a unique imprint with the layout of images of women in the white áo dài (long traditional dress), charming conical hats and colorful flower carpet… The icon áo dài – conical hat – flower creates the gentleness and subtleness of Vietnamese women and also highlights attracting visitors.

The exhibition runs from August 28 to Sept. 3, 2015, with many diverse activities held by ministries, agencies and organizations at Vietnam Exhibition Centre, 148 Giảng Võ, Hanoi.