Mrs. In-La-Văn listened to the guide in Vietnamese. Even though this was the first time she had visited the museum, she already knew a lot about the roles of Vietnamese women in keeping and preserving their cultural values.

Laos and Vietnam shared a long history of supporting each other during the resistance wars against the French colonialists and Americans. Therefore, she was most touched by the exhibition “Women in History”, especially stories about the Vietnamese feminist movements.

She was also moved by the stories about Madam Truong My Hoa – former Vice President of Vietnam who was an inmate at Con Dao prison, Madam Nguyen Thi Thap – leader of the Vietnamese women’s movements in Northern Vietnam and Madam Nguyen Thi Dinh – female general of the Southern feminist movements. During the tour, Mrs. In-La-Văn expressed a deep concern over heroic mother Nguyen Thi Thu who lost her husband, nine sons, and two grandsons in wartime.

Ornaments and beauty methods of ethnic minority women across Vietnam also attracted the delegates. They were fond of several objects such as a beaded jewelry set, aluminum bracelets, earrings and the teeth-cutting tradition.

Mrs. In-La-Văn said that they only had a history room dedicated to Lao women. She wished that in the near future, both organizations will keep in touch and support each other in enhancing the roles of women in both countries. 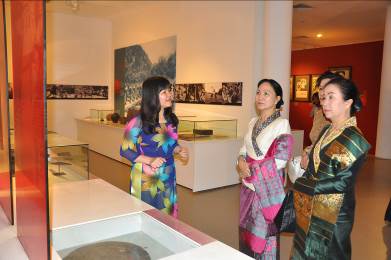 Mrs. In-La-Văn (in the middle) listens to stories about the revolutionists 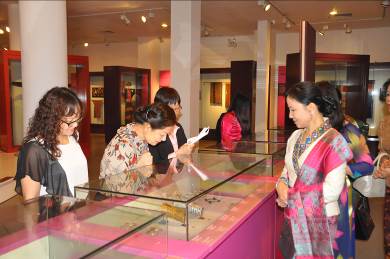 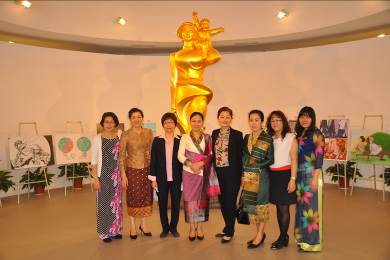