Madam Nguyễn Thị Bình (nee Nguyễn Châu Sa) was born on May 26th 1927 in Dong Thap Province. She was a talented foreign Minister, a Vietnamese communist leader of the South Vietnamese Women’s Liberation Association who negotiated at the Paris Peace Conference in Paris from 1969 to 1973. She was a Minister of Education (1976-1987), Vice Head of the Central External Relations Department of Party and Vice President of the Socialist Republic of Vietnam for the terms 1992 – 1997 and 1997 – 2002.

As a great leader and an eminent diplomat of the country the museum wished to preserve her mementos and introduce her image to the public in Vietnam and overseas. Her pictures are now displayed in the permanent exhibition, as part of the museum’s project on collecting objects from female politicians. The museum also met with Madam Nguyen Thi Binh so as to understand more about her, collect the artifacts and to hear her personal stories.

Even though Madam Nguyễn Thị Bình is now 87 years old, she still recalls and remembers the difficulties and hardships as well as achievements in her career that are connected with the nation’s historical periods. Of all lasting souvenirs, there are a variety of photos relating to the diplomatic work as well as her other high positions of responsibility. She has kindly entrusted these to the Vietnamese Women’s Museum.

Within the collection of artifacts that Madam Nguyen Thi Binh has given to the museum, there are about 70 photos that were taken during the time she took part in the resistance war in the Vietcong zones, over 500 photos when she worked as a diplomat and nearly 100 photos of her in position as Minister of Education and Vice President of the Socialist Republic of Vietnam. In addition, there are 64 photos that were taken with women and children, and over 40 photos taken with her family members when she worked abroad, as well as some articles related to the Peace Accord in Vietnam from 1969 to 1973.

Some photos at the artifacts receiving ceremony: 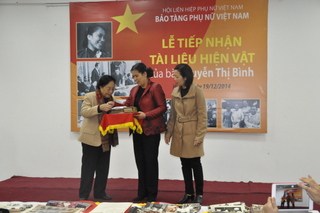 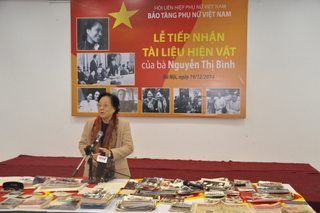 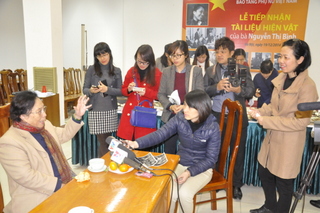 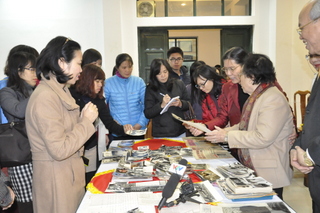