Ho Toan and Hong Minh both joined the resistance wars against the French colonialists and the Americans. They fell in love and got married in 1952 at ATK in Thai Nguyen Province where Hong Minh’s troops were stationed. During that long period of time, exchanging letters and photos was what motivated them to contribute their youth to the motherland.

As a well-educated Hanoi girl, Ms. Nguyen Thi Hong Minh was always haunted by images of starving people dying in the streets and those who were killed by the swords of the invaders for breaking into the pantries and grainhouses of the enemies. 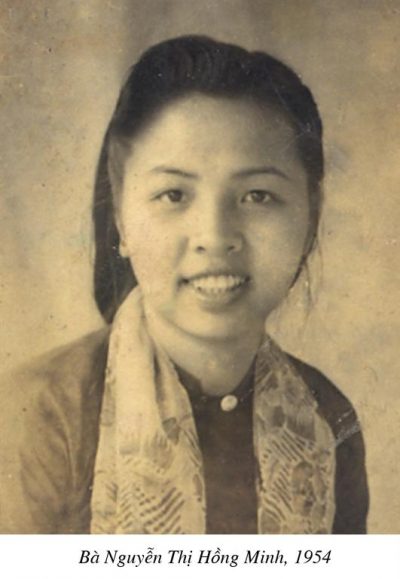 In 1947, her family was evacuated to Phuc Yen Province. She joined a feminist movement there and soon enlisted herself in the army at the age of 20. She was sent to Nursing Team II which was stationed on Bua Hill, at the foot of Tam Dao Mountain. Her mission was to take care of wounded soldiers and manage logistics for the Tran Hung Dao campaign. As fate would have it, she met Ho Toan, a medical officer, and was instantly drawn to him. She admired him because he was an intellectual man of a good character and could speak English and French fluently. “Our love was solely based on decency and respect,” Minh recalled. Their wedding was planned for December 26th, 1951. Even though the invitation cards had already been sent, Minh found out shortly before the special day that she had been assigned to take part in the Hoa Binh campaign. At that moment she was not able to contact Toan because he was on a business trip, so she left him a quick note to apologise.

“Don’t you worry at all?” her commander asked, after noticing that her wedding was about to occur in several days. After a moment’s hesitation, Minh replied: “The motherland has to be put first.” If the motherland no longer exists, neither does love. With that thought, she quickly accepted the assignment to join the campaign from late 1951 to early 1952. This campaign was considered a rehearsal for the remarkable Dien Bien Phu campaign later on.

Unaware of the situation, Ho Toan traveled from Cao Bang to Thai Nguyen as scheduled for the wedding procession. By the time the delegation arrived at the bride’s house, she had already gone.

On the frontier, Minh received a total of 23 letters from her fiancé, containing words of encouragement, including this short poem:

Everything stays where it is

Because of you I missed the train

This spring, please make it up to me!”

They vowed to get married when the war ended. After 3 months of constant fighting, the Hoa Binh campaign finally came to an end. Hong Minh came home to marry the love of her life. The wedding was held at Pho Duc Thuc Hospital in ATK Thai Nguyen on March 20th, 1952.

After the wedding, the newlyweds only saw each other once a year as Toan mainly worked on the frontlines. Therefore, they stayed connected through their letters. From 1951 to 1971, the couple exchanged a total of 275 letters; each numbered carefully.

The priceless gifts of their love are 4 lovely children born during the resistance wars. “He had to leave before each child was born. By the time he returned, the kids could talk and toddle,” Minh said. It was not until they both retired in 1980 that they were finally united. 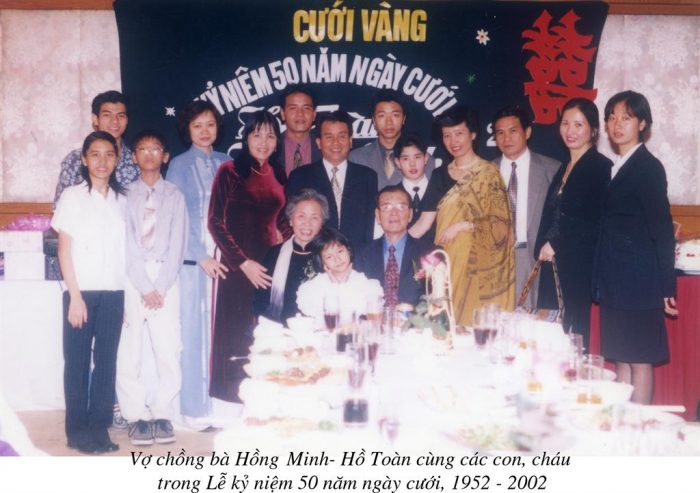 In 2002, on the occasion of their 50th anniversary, their children organized a big party to celebrate their love story. The small house was packed with hundreds of photos and love letters that the couple had preserved so carefully over half a century.

The staff of the Vietnamese Women’s Museum feel lucky to have been able to talk to Mrs. Hong Minh – a brave woman who fought so hard for our country – to listen to her moving love story and to hold in our hands her greatest keepsakes. The museum knew that this precious history must be preserved, but the process of collecting these objects was not simple. First, we had to develop a trusting relationship with her. Our staff visiting her house many times to express the Museum’s deep sincerity and wish to make this love story known.

With her permission, we carefully documented her letters and transferred them to our storage facilities. We believe it is important to preserve these letters for future audiences, and to share such a moving story that is tied so closely to an important historical period of Vietnam. Several of Mrs. Hong Minh’s keepsakes were exhibited in the “Dien Bien Memories” exhibition at the Vietnamese Women’s Museum to celebrate the 60th anniversary of the Dien Bien Phu Campaign. (1954-2014).